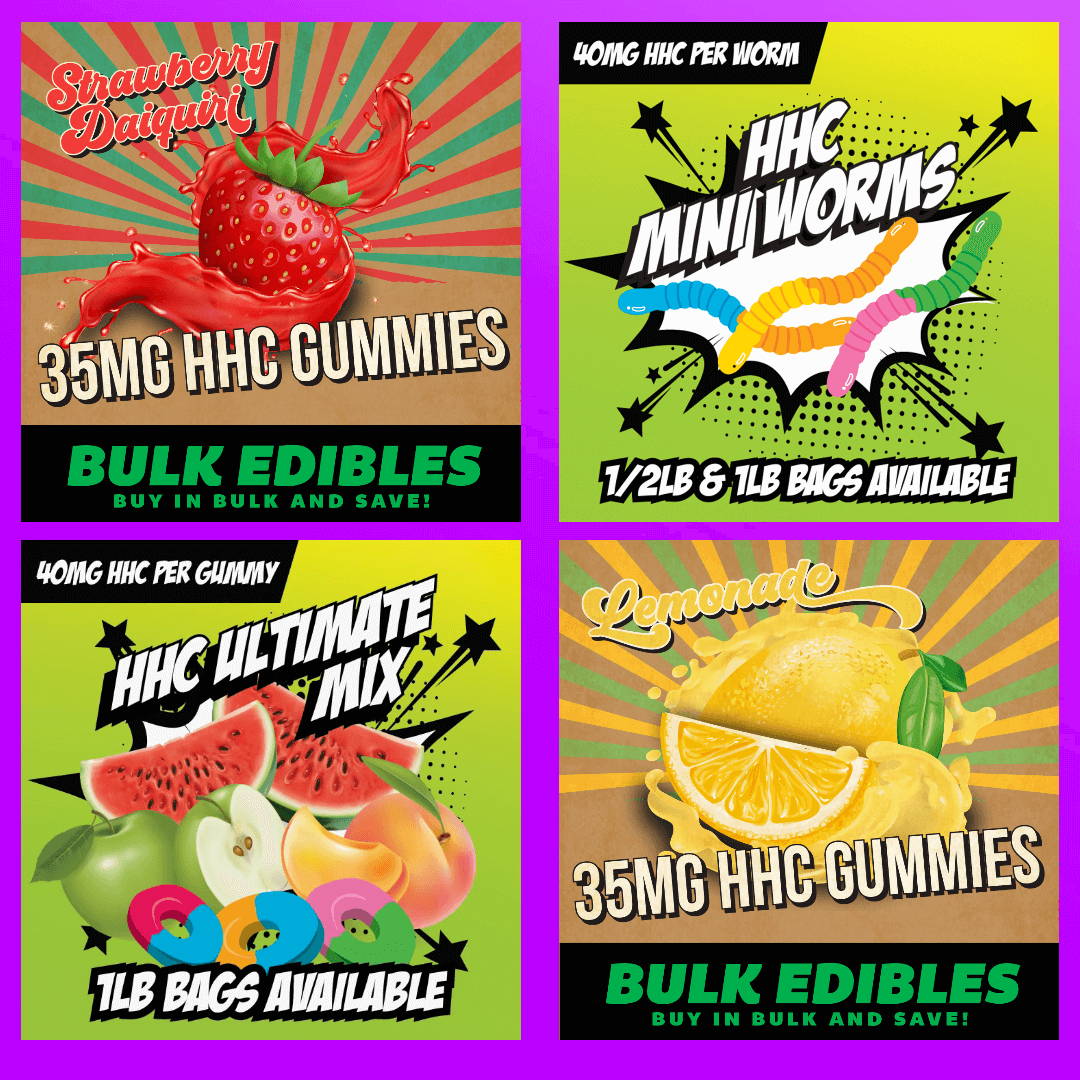 What do HHC bulk gummies do?

Many users say that HHC helps them ease into sleep, combatting stress, soothe physical discomfort, and just plain deal. They also say that like delta-9 gummies and delta-8 gummies, it helps stimulate appetite and enlighten their mood, which may be helpful to those who might have trouble eating throughout the day

How many bulk HHC gummies come in a 1lb bag?

Are HHC gummies stronger than Delta 8?

Two key difference between THC gummies and its HHC gummies is potency. HHC gummies are slightly stronger than delta 8 gummies  but less potent than delta 9  gummies, making it a good option for people who want a little more than delta 8 can offer. Delta 8 is half as strong as delta 9.

Hexahydrocannabinol, or “HHC,” is a cannabinoid, which are naturally occurring compounds in cannabis plants. Scientists have found more than 100 cannabinoids.

The most commonly known cannabinoids are Delta-9 THC and cannabidiol (CBD). THC is the ingredient in marijuana that makes you feel high. Cannabidiol is the ingredient in many CBD products that claim to help with everything from pain and soreness to anxiety, depression, and sleep problems. The FDA has not approved any THC drug for use in a medical setting.

There is one CBD product, Epidiolex, that the FDA approved for use with medical supervision to treat seizures in limited cases. There are also three FDA-approved synthetic cannabis-related products to treat nausea, vomiting, and loss of appetite. Beyond that, there is not enough evidence to know if these products are safe to use over the long term or whether they do what they say they do.

Cannabinoids like Delta-8 THC and HHC have appeared more recently in the marketplace. They are made by starting with THC or some other cannabinoid and changing it slightly in a chemical laboratory. They have no FDA-approved use. There is very limited information about their safety and usefulness, but there are some reports of bad side effects.

Yes, we have 1000mg HHC gummies; we have the largest online selection of HHC gummies online. 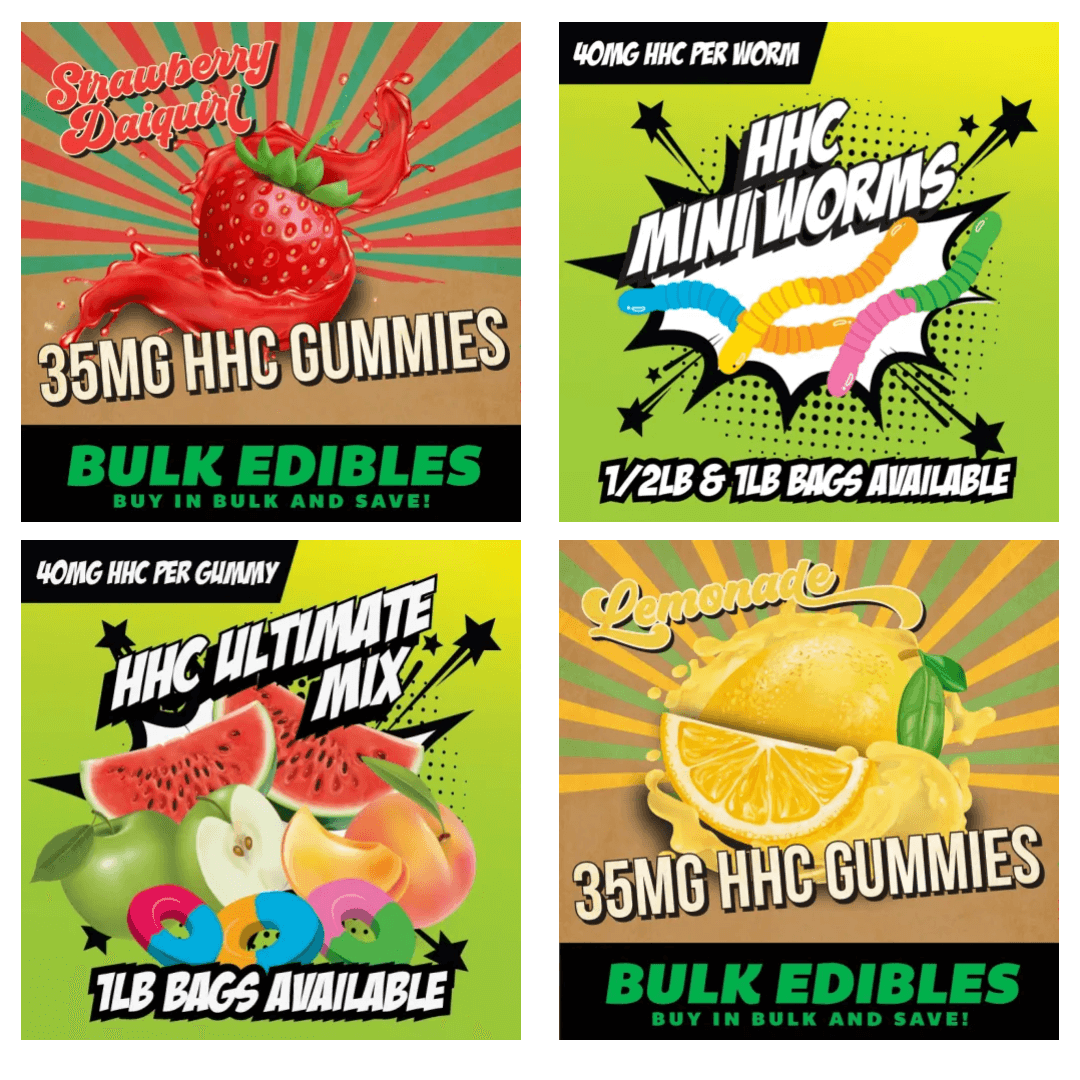 PRESENTLY, THE HHC CANNABINOID PRODUCTS ARE TREADING THE GREY AREAS OF LEGALITY BETWEEN HEMP AND CANNABIS . UNTIL DEFINITE LEGISLATION IS ANNOUNCED, RETAILERS AND PRODUCERS WILL CONTINUE TO ASSUME HHC TO BE LEGAL.

Having a full grasp of HHC can be somewhat complicated given it just recently hit the market. Presently, just a few retailers have it for sale and mostly in the form of vape carts. HHC is said to offer plenty of potentials, so don’t be surprised when you begin to hear more about the cannabinoid. As federal and state agencies continue to place a ban on delta-8 THC, HHC now provides more legal appeal and promise to canna-enthusiast. This is because HHC is not a THC compound and it’s said to also be able to elude drug tests. However, the evidence for this is simply anecdotal.

HHC is chemically known as 11-Nor-9β-hydroxyhexahydrocannabinol. It is a semi-synthetic cannabinoid and a hydrogenated form of THC. HCC was first manufactured in 1944 by an American chemist known as Roger Adams. To produce HHC, Adams added hydrogen molecules to delta-9 THC, converting THC to tetrahydrocannabinol (HHC). This process is known as a hydrogenation reaction. However, while Adams produced HHC from traditional cannabis-derived THC, a modern approach is used today. As a result of legislation and policies surrounding the possession and use of cannabis, low-THC cannabis plants and hemp are used to produce HHC. How Is HHC Made?

Given HHC is a semi-synthetic compound, it is produced in the lab. Molecules of low -THC cannabis are isolated to give specific cannabinoids with the potential to compete with their family tree. HHC is produced when a specific amount of hydrogen is administered to a cannabis compound altering its chemical structure. After that, a metal catalyst is added to induce a reaction with the compound. This catalyst heightens the overall reaction without damaging the product. The overall chemical reaction produces HHC which wouldn’t otherwise occur in nature.

The catalysts usually used for the production of HHC include platinum, palladium, and nickel. These metal catalysts are removed once the reaction is complete.

How Safe Is HHC? However, some retailers still go-ahead to test their HHC products using third-party laboratories. The tests do show a product that contains 99% HHC.

How Potent Is HHC?

Common ground is yet to be reached concerning the potency of HHC. This is because when cannabinoids are produced, the product is usually a mixture of two different types of HHC molecules. These molecules include the 9R HHC and 9S HHC. While the 9R HHC actively binds to the body’s endocannabinoid receptors, 9S HHC does not bind so well owing to the difference in its molecular structure. The 9R HHC molecules that fit into the receptor yield the same effects as delta-9 THC, but, with a higher dosage. Hence, with a significant amount of HHC dosage, THC-like effects can be identified. To simply put, HHC can have the same effect as THC on the mind and body but HHC has a lower potency than delta-9 THC. Some HHC users have claimed that HHC gives a pleasant and average cerebral high. There are also claims of HHC serving as pain relief. Some claim they feel sharp, energetic, and strong after using HHC for recreational use.

Benefits And Effects Of HHC

Among cannabinoids that have been introduced recently, HHC is the only one that shares very close similarities with Delta-9 THC. HHC is similar to Delta-9 THC in terms of a chemical structure and therapeutic effects. This is why many have reported effects such as pain relief, anxiety relief, cerebral and body, relaxation, and happiness after consuming HHC.

Even though lots of studies are still running to better understand HHC, some studies have so far linked HHC to curing cancer. Among other synthetic and natural cannabinoids, HHC has been discovered to shrink tumors in cancer patients. This is great news for HHC and its future potential as a medicinal cannabinoid

Does HHC Show Up On A Drug Test?

A lot of people are starting to turn to HHC with the claim the cannabinoid can evade drug tests. However, all evidence supporting this claim is only anecdotal. Most of the claims are just hearsay,  it’s possible that HHC doesn’t convert to 11-hydroxy-THC which is a popular drug test metabolite. If HHC doesn’t convert to 11-hydroxy-THC, then it can evade drug testing.

Presently, there’s no concrete evidence that backs up the claim that HHC does not show on drug tests. Don’t bet your career and job on hearsays and anecdotal evidence.

This is perhaps the most complicated question about HHC. We would say yes. This is because HHC is hemp-derived and not produced from THC. Based on this fact, HHC should be in the clear. HHC gummies, edibles, and vapes are all legal on the federal level and should also remain legal on state level. Other arguments that support the legality of HHC claim that HHC is found in the pollen and seeds of hemp plants. Hence, it is non-synthetic and therefore perfectly federally legal. Presently, HHC products are treading the grey areas of legality between hemp (which is legal) and cannabis (which is not). Until definite legislation is announced, retailers and producers will continue to assume HHC to be legal.

All HHC (hexahydrocannabinol) products are produced using chemically hydrogenated HHC from THC. Based on present research, HHC itself is not dangerous or harmful, but note that how it’s produced can be dangerous. Hence, the HHC product you buy can have plenty of impurities and contaminants due to poor hydrogenation procedures. To this end, make sure you purchase your HHC products from reputable and credible HHC vendors that have third parties test their products.